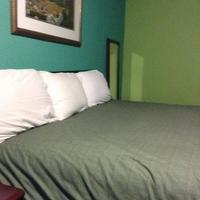 “Sure, the room had been cleaned, but that only gets you so far when you've got a leaking toilet and crumbling cinder blocks. It had a coffee maker, but no coffee or coffee cups, a tv, but it was so old only one button in three actually worked, a decent King mattress, but threadbare bed spreads and seriously lumpy pillows. But the staff was pleasant and the room was cheap and (roughly) as described. I got the sense they were trying to make improvements but the battle was so uphill it was futile.”
“Staff”